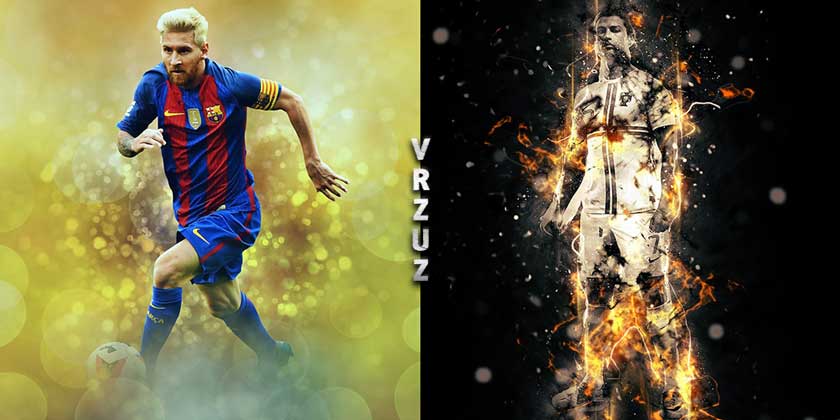 The great rivalry between Lionel Messi and Cristiano Ronaldo gets tighter every year. In this Messi vs Ronaldo post we compare statistics, skills and trophies of presumably two of the best football players of all time. It’s time to find out who is better.

Lionel Messi has an unbelievable record of scored goals. Messi started playing on league level at season 2004/2005. Since then he has finished 0.87 goals per game on average in La Liga and Ligue 1. Leo’s ability to finish goals is unreal.

Ronaldo started his football career on league level at Sporting CP in 2002. Just after first season he was traded to Manchester United for 6 seasons. All seasons between 2009/2010 and 2017/2018 Cristiano Ronaldo was part of Real Madrid organization. For season 2018/2019 he was traded to Juventus and 2021/2022 back to Manchester United. Ronaldo’s aggregate goal average is 0.76 per game in league matches.

Ronaldo has a ratio of 0.73 goals per game in Copa del Rey and equivalent ratios of 0.48 and 0.77 in Other Cups and Champions League.

Messi produces plenty of key passes and through balls. His all-time club career ratio of assists per game is 0.35.

Ronaldo’s all-time club career assist ratio is 0.23 per game. The accuracy of Cristiano’s passes is quite close to Leo’s, but the lack of vision is where Ronaldo falls a bit short compared to Messi.

Messi manages to create goal changes over twice as much as Ronaldo. Also, Messi’s assist ratio is about 50% better than Ronaldo’s.

Heading is clearly Messi’s notable weakness, mainly because his lack of height. Also, the fact that Barcelona’s playing philosophy is built on passing and controlling the ball, doesn’t help Messi to develop his heading skill.

Lionel Messi isn’t bad with his head though. He will make a goal if given the opportunity. It’s just the fact that he won’t get many chances.

Cristiano Ronaldo has probably the world’s best heading skill. Ronaldo’s ability to jump higher than his opponents at exactly right time and place, makes him a feared goal scorer.

Ronaldo uses his speed well to create powerful headers. If received properly timed crosses, Ronaldo can be a threat even to the tallest defenders.

Messi is presumably the best dribbler in history of football. His ability to keep the ball glued to his feet with high accelerated speed makes him an unstoppable force.

Taking account that dribbling is the hardest skill to master in football, just underline how gifted footballer Lionel Messi is. His agility, balance, reactions, ball control and patience of mind to make the right move at right time is enviable.

Ronaldo is an excellent dribbler as well. Cristiano’s dribbling style is completely different though. His moves are more straightforward, and he uses more of his speed to pass his opponents.

In the end, Cristiano Ronaldo’s dribbling skills don’t quite match Messi’s proficiency. Messi has an ability to overtake several defenders and start his dribble run from midfield, even when most of the opponent players are under the ball.

Lionel Messi has an ability to accelerate to the full speed in no time. He’s not as fast as Ronaldo but he can be seen quicker in his first steps.

Messi’s quick feet and skill enables him to keep ball closely with him, even in a crowd of opponents. Messi is said to run faster with a ball than without it.

Ronaldo accelerates quickly too. Yet being a bigger player than Messi, his first meters with the ball are slightly slower.

After reaching full speed Ronaldo is undeniably faster than Messi. Due to his speed, Ronaldo can perform deadly counter attacks and reach into scoring situations where others can’t. Although, his ball control at full pace is somewhat weaker than Messi’s.

Among with heading skill, Messi’s physical presence is modest. His lack of physical presence sometimes makes it difficult to pass thru opponent’s athletic defenders. Especially in cases where opposing team is positioned in turtle defense.

However, Leo is perfectly capable to stand up against enemy players and has enough power in his shots. While dribbling and finding free slots, his shortness can be an advantage.

Ronaldo is an example of perfect modern footballer. He can jump high, has a strength of a bull and stamina of a train.

Although, Ronaldo could use more of his body and be more aggressive on the field. He’s a big fellow, but still seem to go down too easily, at times.

Messi’s strong contribution to team play is undeniable. He can generate numerous solo goals yet not holding ball no longer than he should have done. The fact that Messi can produce a lot more solo goals than Ronaldo and still beating him clearly in assists, makes Leo Messi one of the best team contributors ever. Messi has unselfish side in his game as he often gives passes on team mates on better scoring spots or even hand them chance to take penalties.

Messi’s discipline is also on high level. Even after receiving many kicks and tackles in every game, he usually refuses to go down and tries to continue the attack.

Cristiano Ronaldo is a solid contributor as well but he’s not in Messi’s level. Albeit Ronaldo creates lot of goals to help his team win, he’s frequently being accused of being too selfish. Ronaldo also seem to get frustrated at times and has often received criticism for feigning injury. Also, accusations of Ronaldo going down too easily, have not been diluted.

Despite all these claims, Ronaldo’s assist stats have getting better in recent years and he has learned to put the team before his personal achievements every now and then.

So far Lionel Messi has better goals per game ratio in his career. He also succeeds to produce considerably more assists and so on has a better impact on his team’s play than Ronaldo has.

Messi’s weaknesses are mainly based on his physical limitations. In the areas he gives equalization to the others, Messi manage to overcome them by his outstanding vision, unique technique and creativity.

While Ronaldo make it almost par with Messi, talking about goals, his playing style and key strengths are almost completely inverse. Ronaldo relies on strength, speed, heading and timing.

Whereas Messi is more of a gifted natural footballer, Ronaldo is seen a hard working “power house”. Cristiano Ronaldo could be described as comprehensive athlete.

Who is better: Messi or Ronaldo?

Even though the statistics favor Messi over Ronaldo, the future is unclear. As a more natural footballer Messi had better stats at younger age than Ronaldo. Leo Messi is also less selfish player. He could have done even more goals if not given so many assists and/or offered penalty chances to his team mates.

But, Ronaldo seem to have endless drive. He pushes himself forward every single season. If we compare recent years, Ronaldo has been more efficient player in Champions League. Even in La Liga, if we compare just goals.

Anyhow, there’s something most fans tend to forget. It’s the fact that Lionel Messi is over two years younger than Cristiano Ronaldo. Messi will have more peek years left on his career and will most likely win the rivalry in the end. Unless Ronaldo improves even more than he has so far. If Ronaldo can stay fit and fight against aging, anything can happen.

Even so, at this moment, odds are favoring Messi to win the rivalry. In near future we’ll get the answer. Before Lionel Messi vs Cristiano Ronaldo rivalry ends, enjoy these magnificent footballers, as long as it last!